Skip to content
Home » Knight Blog » Why Am I a Knight? Dan Fowler 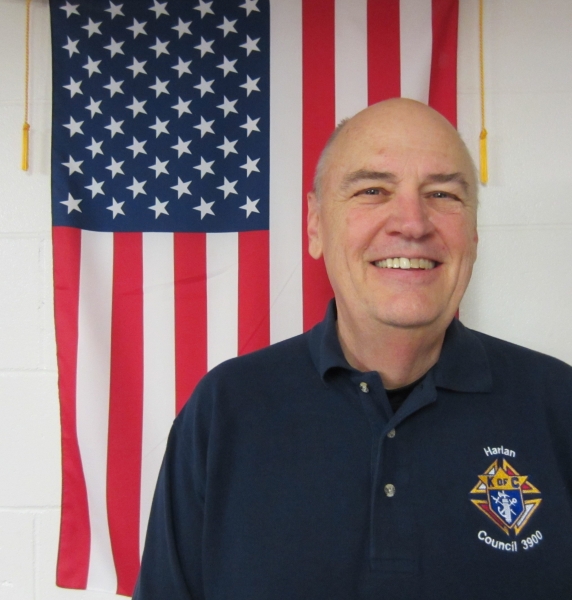 Offices held in the Order: DGK and Recorder

What comes to mind when I think of the K of C: Service to others.

K of C projects involved in: Fish fries plus anything else that needs to be done

Why I Became a Knight –

I was raised in a small rural town in northern Missouri. We had a traveling Priest, Father Hunt.  What is a traveling Priest; well, Father had three parishes that he watched over.  Each parish was at least 25 miles apart.  Father would serve mass at 7:30 am at one parish, another at 9:00 then the last mass was at 11:00 at the third parish.  I found out early that Father could not be in three places at the same time.  Father did try, I can remember that he had two St. Christopher statues on the dash of his car – one for under 60 MPH and the other for over the speed limit.  We only had 14 families at St. Mary’s.  So I grew up, by my mother’s wishes, pitching in to help the church.  We mowed the grass, shoveled the snow, cleaned and even painted the church.

I was first introduced to the Knights of Columbus at my Uncle’s funeral.   I was about 7 or 8 at the time and we had to drive to St. Louis for the services.  I do not remember the name of the church but I can tell you it was one of the largest churches that I ever seen.  My uncle was a Fourth Degree and I can remember the funeral with the capes, hats, and the swords; plus all the pomp and ceremonies that went along with the services.  I did find out later when I went to college what other activities that the Knights were involved in; I went to a K of C sponsored breakfast for incoming freshman.  I must say that I was a little disappointed – there were no capes, a hat or even a sword.

I join the Knights of Columbus over 25 years ago.  I belong to the Harlan Volunteer Fire Department, to the local Scouting units, but I felt that I needed to help the community thru the church.  I’ve always believe that you should not criticize if you are not willing to get involved.  I’ve gotten more from these organizations than I’ve ever put in; I get to work with people that have the same views, beliefs  and desires to make this a better place to live.   The Knights, Fire Department and the Scouts give me a sense of belonging and the pride of being able to help others.

Come join us and experience the sensation of making a difference.

5 thoughts on “Why Am I a Knight? Dan Fowler”