Skip to content
Home » Knight Blog » Why Am I a Knight? Les Blum 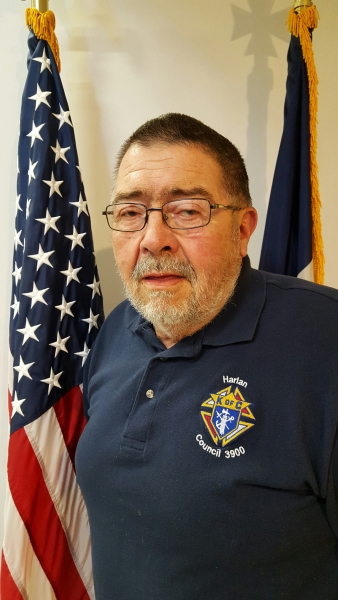 Occupation:  Retired from farming and construction

Hobbies and interests:  Enjoy going to grandkids sporting events and traveling and reading

What comes to mind when I think of the K of C: Charity, Unity, Fraternity and Patriotism

K of C projects involved in: Meals on Wheels program for 12-13 years, Fish Fry’s, KC breakfasts, Habitat for Humanity, building a ramp for a family with a handicapped child

My name is Les Blum and I have been a lifetime resident of Shelby County growing up in the Westphalia area. I am retired from farming and construction and joined the Knights in December of 1990 and became a 4th degree in May of 2005. Offices I have held include: Chancellor, Deputy Grand Knight, Grand Knight, District Deputy, Trustee and Faithful Navigator. I enjoy going to grandkids sporting events and traveling and reading.

When I think of the KC’s I think of Charity, Unity, Fraternity and Patriotism

Projects I have been involved in include Meals on Wheels program for 12-13 years; this was a very rewarding program as some of the people you delivered to would not see anyone else that day. I have also helped with Fish Fry’s, KC breakfasts several times a year, Habitat for Humanity, helped build a ramp for a family that had a handicapped child, also went to State Conventions several times during the years. It was a great time to meet KC’s from all over the state and to get new ideas.

I first was introduced to the Knight of Columbus when I was quite young and my uncle who only had 2 daughters would ask me and my brother to go to the Knights’ Christmas parties, then as I was growing up and seeing the Knights with regalia and all I got to thinking more about joining but would probably just do 1st, 2nd, and 3rd degree. As I learned more and found out all they did I decided to join the 4th and I am glad I did.

Your Brother in Christ