Skip to content
Home » Knight Blog » Why Am I a Knight? Phillip Hascall 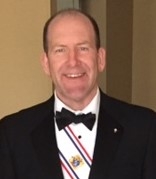 What comes to mind when I think of the K of C: Helping those in need.

I became a Knight in May of 1977 a year after graduating from high school in Atlantic, Iowa. Several Knights from my parish approached me and convinced me to join. I respected these men for the way they practiced their faith in our community and our parish. Although I moved away from Atlantic and became inactive; when I returned to SS Peter & Paul Parish, got married, and started a family I was encouraged by a Knight, whom I respected, to become active again in the Knights of Columbus. I thank God for these Brother Knights; Richard Borchart, Francis “Bud” Johnson and Joseph O’Brien for mentoring me in those early years.

Over the next twenty years I participated in programs sponsored by Council 1164; CPID, Fish Bakes , Knights Breakfasts, Spelling Bee and any project our pastor needed help with around the parish. These activities gave me a sense of belonging to a charitable organization of men whose mission is to help our brothers and sisters in need.

In May of 2014 Grand Knight Keith Leonard ask me to run for Deputy Grand Knight of Council 1164.  I was launched into the next phase of my spiritual development. I am now Grand Knight of this same council. I continually reflect on the meaning of the First, Second, and Third Degree in my daily life. Yes, there are many charitable organizations we Catholic men can belong to, but none as faith centered as the Knights of Columbus; a unified fraternity of Knights helping our brothers and sisters in need with acts of charity.

I recently became a fourth degree at our annual convention.  This strengthens my resolve to protect our freedom to practice our great Catholic faith.

Every Sunday while listening to the Gospel I am reminded that being a knight fulfills the call that Jesus is asking us to answer. What better way to practice the Corporal and Spiritual works of mercy than being a knight in this year of Mercy.